A TALE AS OLD AS TIME, IN MARBLE

Possibly the most extravagant memorial gift from a husband to his beloved departed wife, built to honor their emotional bond for all eternity, the Taj Mahal symbolizes that rare encounter, a gift everyone is yearning for and hopes to find at least once in a lifetime called Love. Only the few lucky of us who have experienced that feeling of bliss can appreciate the true meaning of the Taj Mahal, as it was intended.  After all, Love is universal and knows no time. What was true for a Mughal royal in XVIII century India is still true today. 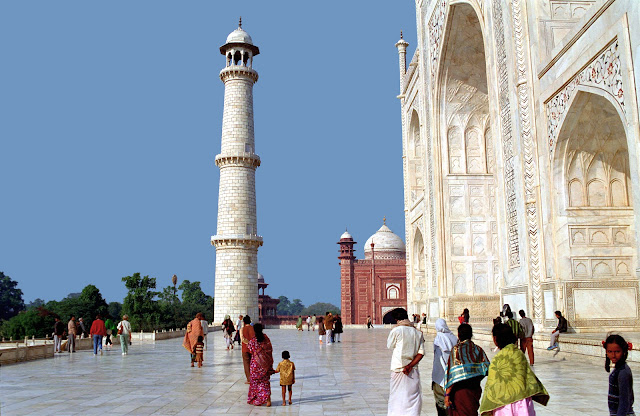 I invite you on a visit to the fabulous Taj Mahal and reveal, its concept, why and how it was built, the craftsmanship used to make a king's dream a reality and finally who is resting within its sparkling white walls. Many of you may already know the story, or at least have some knowledge behind one of the iconic monuments recognized the World over. It is a tale for all times and all cultures.

SHAH JAHAN, KING OF THE WORLD

As the fifth ruler of the Mughal Dynasty which ruled India between 1526 and the beginning of the XIX century, Shah Jahan was born as Prince Shihab-ud-din Muhammad Khurram, in 1592 in Lahore, India (modern day Pakistan) as the third and favorite son of Mughal Emperor Jahangir, a muslim, from his favorite wife Manmati, a hindu queen.  Khurram which translates "joyful" in Persian was given by his grandfather, Akbar the great, one of the most successful rulers of all times. Descending from Timurid lineage (Tamerlane) which ruled Central Asia, Iran into Anatolia region of Turkey, Prince Khurram received a cultured, broad education and he distinguished himself in the martial arts and as a military commander while leading his father's armies in numerous campaigns. Early on he demonstrated a talent for building, impressing his father at the age of 16 when he built his quarters within his great grandfather Emperor Babur's Kabul fort and redesigned buildings within Agra fort.

In 1607, at the age of fifteen, Khurram was promised to Arjumand Banu Begum, the daughter of a Persian noble, Abdul Hasan Asaf Khan, the brother of Queen Nur Jehan (her mother in law). A shia muslim , she was 14 years old at the time. They would, however, have to wait five years before they were married in 1612, on a date selected by the court astrologers as most conducive to ensuring a happy marriage. After their wedding celebrations, Khurram "finding her in appearance (she was to be of great beauty) and character elect among all the women of the time", gave her the title 'Mumtaz Mahal' Begum (Chosen One of the Palace). During that time period, Khurram took two other wives. By all accounts however, Khurram was so taken with Mumtaz, that he showed little interest in exercising his polygamous rights with the two earlier wives, other than dutifully siring a child with each.

Mumtaz Mahal had a very deep and loving marriage with Shah Jahan. Even during her lifetime, poets would extol her beauty, grace and compassion. Mumtaz Mahal was Shah Jahan's trusted companion, travelling with him all over the Mughal Empire. His trust in her was so great that he even gave her his imperial seal, the Muhr Uzah who had wielded considerable influence in the previous reign. She was a great influence on him, apparently often intervening on behalf of the poor and destitute. But she also enjoyed watching elephant and combat fights performed for the court. It was quite common for women of noble birth to commission architecture in the Mughal Empire. Mumtaz devoted some time to a riverside garden in Agra.Despite her frequent pregnancies, Mumtaz travelled with Shah Jahan's entourage throughout his earlier military campaigns and the subsequent rebellion against his father. She was his constant companion and trusted confidante, and their relationship was intense. Indeed, the court historians go to unheard lengths to document the intimate and erotic relationship the couple enjoyed. In their nineteen years of marriage, they had fourteen children together, seven of whom died at birth or at a very young age. Mumtaz died in Burhanpur in 1631, while giving birth to their fourteenth child.

The contemporary court chroniclers paid an unusual amount of attention to Mumtaz Mahal's death and Shah Jahan's grief at her demise. In the immediate aftermath of his bereavement, the emperor was reportedly inconsolable. Apparently after her death, Shah Jahan went into secluded mourning for a year. When he appeared again, his hair had turned white, his back was bent, and his face worn. Jahan's eldest daughter, the devoted Jahanara Begum, gradually brought him out of grief and took the place of Mumtaz at court.


The monumental tomb rests atop a plinth made of white marble. An elaborate system of pulley was used to carry the marble blocks into place with the help of hundreds of donkeys and bullocks. The construction of the plinth and mausoleum took a work force of 20,000 a total of 12 years, toiling on a daily basis who were housed outside the garden perimeter in a settlement known as Mumtazabad, in honor of the departed queen (now renamed Taj Ganj). The workers housing complex is still visible and in use to this day. Followed were the four minarets, the mosque and adjacent buildings and finally the gateway which were all completed within the next 8 years.

A substantial number of international artists and craftsmen participated in its decoration. The best and the brightest of the time were commissioned to realize something out of a King's dream. Some as far as Florence, Italy and the Middle East. Turks and Persians were the main conceptual artists.

The material used in the construction came from far and wide. With the help of one thousand elephants, red sandstone was brought in from Fatehpur Sikri, jasper from Punjab, jade and crystal from China, turquoise from Tibet, lapis lazuli from Afghanistan, sapphire from Sri Lanka, coal and cornelian from the Arabian peninsula and diamonds from Panna in the indian state of Madhya Pradesh. In all, twenty eight kind of rare semi precious and precious stones were used to transform the mausoleum into a jewelry box. The main building material, white marble, was carried from the quarries at Makrana in neighborhing Rajasthan.

It is widely believed that the Taj Mahal was designed to represent an earthly replica of one of the houses of paradise. Its impeccable marble facing, embellished by a remarkable use of exquisite surface design, is a showcase for the refined aesthetic that reached its height during Shah Jahan's reign. Described as one of the "most elegant and harmonious buildings in the world," the Taj is the iconic structure demonstrating the wealth and luxury of Mughal art at its peak. The Mughals were great naturalists and believed that flowers were the symbols of "the divine realm." In the Taj, pietra dura (inlaid marble design known as pachikari) has been extensively used to translate naturalistic forms into decorative patterns that complement the majesty of its architecture. The Florentine technique of Pietra Dura is said to have been imported by Emperor Jahangir (Shah Jehan's father) and developed in Agra. Tiny slivers of precious and semi precious stones were arranged in complex stylized floral designs set into a marble base. Flowers, such as the tulip, lily, and narcissus were depicted as sprays or in arabesque patterns. Stones of varying degrees of color were used to create the shaded effects.

The four detached minarets springing from the plinth of the Taj Mahal measure 138 feet high and stand like sentries nobly keeping guard. They were built out of plumb, slanting so that if they were to topple, they would fall outwards of the Taj, protecting the tomb from harm. They were an afterthought and leftover marble of various sizes and shapes was used for their construction. In order to harmonize them all, black marble was inlaid on each which gives an illusion of uniformity to each. They form a visual framework to the Taj proper and enhance the symmetry of the building.

A red sandstone mosque lays on the Western part of the Taj Mahal where Muslims collect every Friday to offer their prayers to Allah. According to Islamic rule, the mosque faces Mecca and is complimented by another red sandstone building on the East side of the Taj which is believed to have been built to mirror the mosque in color and design, probably as a symmetrical feature to the ensemble. There is a small stone enclosed space, a greenery shaded structure marking the temporary burial where Mumtaz Mahal's remains were kept until the completion of the mausoleum. This enclosure is located along the western boundary wall, which houses the well of the Mosque.


The Taj gateway is a tall niche doorway in the shape of an ogival arch that rises to the mid-height of the structure. With a vertical symmetry, the main gateway of Taj Mahal stands bordered with Arabic calligraphy of verses from the Quran made of black stone. The calligraphy size cleverly increases from top to bottom to give the illusion of uniformity to the script from any distance. Entwined flowers, mainly red lotus leaves and vines, ornament the sloping sides of the niche. These motifs are made of semi-precious stones inlaid in marble.

Further beautifying the gateway to the Taj is an image of a white teardrop with a red trident, located above the pointed tip of the niche. When the gateway was under construction, this frontal gateway served as the main entrance. All these motifs reflect an Hindu touch to this otherwise Muslim monument. The flowers, vines, and leaves that are sinuous and idealized rather than geometric, the red lotus flowers that represent Lord Brahma are some of the Hindu influence in the construction of Taj Mahal.

As always seeing is believing ... come see for yourself and be amazed at the grandeur and inspiration of love's achievement.